Along with his activity as a conductor, Grigor Palikarov composes, performs in concerto playing the piano and teaches at the National Music Academy “Prof. Pancho Vladigerov” where he successfully pursued his Ph.D. degree in Music Studies and Music Art in 2017. Some of his works are being performed at a number of festivals and have been recorded many times. He has won many national and international awards for his successful performance as a composer and pianist at the competitions “Svetosalv Obretenov”, “Albert Roussel”, The Music of the Earth, etc. Three-time laureate of the prestigious award Crystal Lyre of the Union of Bulgarian Musicians and Dancers – 2002, 2012, and 2017, as well as of the ward the Golden Feather. Within two mandates, Grigor Palikarov has been the Chair of Mensa-Bulgaria –  the branch of the worldwide organization of people with high IQ.

Nadejda Tsanova started playing the piano at the age of five, and at the age of six she joined Elena Yuliyanova as a student. In 2005 was admitted to the National Music Academy “Prof. Pancho Vladigerov” in the class of Professor Stella Dimitrova-Maystorova and Prof. Iliya Chernaev. During hers studies she made hers first tour in Europe, visiting Vienna, Prague, Budapest, Bratislava and the Czech Republic. She became a scholarship holder of the “Todoroff”, “Globul M3 Communications” and “Solty foundation” foundations. In 2011 Nadejda Tsanova graduated with a master’s degree in piano and began specialization at the Royal Conservatory in Brussels, Belgium under the guidance of Prof. Boyan Vodenicharov. At the same time she graduated from the “Schola Cantorum” in Paris, where she received the highest award for concert pianist – “Diploma Di Concert”. In 2013 won first prize at the international competition for pianists in Paris “Flame”. This award marks the beginning of an international concert career. She has toured internationally in Japan, China, Spain, Portugal, Austria and Germany. She received invitations to solo with the Kharkov Symphony Orchestras – Ukraine, Tokyo – Japan, Illinois – Chicago – USA, Adana – Turkey, Regensburg – Germany, the Salzburg Soloists Chamber Orchestra – Austria, the Bulgarian National Radio Orchestra and the Sofia Film Orchestra. Followed by international awards from the competition “Mayenne” – France, “Treviso” – Italy and “Debut Berlin” – Germany. She gives solo recitals in Italy, Belgium, Germany, France, Spain, Portugal, Austria, Russia, Ukraine, Turkey, Poland, Czech Republic, Hungary, Slovakia, Japan, China, USA and others. Together with the trumpet player Petar Makedonski she realized an extremely successful duo, which in a short period of time won 5 awards from national and international competitions. The duo also won the BNR “Musician of the Year” award in the “Ensemble” category for 2017.  Nadejda Tsanova has an extremely diverse repertoire, not only as a soloist but also as a chamber musician. Participates in TV shows and records for the Bulgarian National Radio.

Evgenia Ralcheva was born in the city of Plovdiv. She studied with the world-famous mezzo-soprano Alexandrina Milcheva and graduated from her Sakra Academy. In the period 2006-2008 is a soloist of the State Opera Ruse, and in 2009 won second prize and a silver medal at the International Opera Competition “Boris Hristov”. From 2014 until today he is a soloist of the State Opera – Plovdiv. In 2015 he received the “Crystal Lyre”, and in 2016 – the prestigious award “Plovdiv” in the Music section. Participates in a number of festivals such as “Sofia Music Weeks”, “Days of Music in Balabanov House”, “Filipi”, “March Music Days”, “Apollonia” and others.

Monika Zasheva graduated from the National Academy of Music “Prof. P. Vladigerov ”with a master’s degree in opera singing in the class of Gabriela Georgieva in 2021. Lauerat is in various competitions, including the international competition for young opera singers” Gena Dimitrova “- Pleven, 2021, the competition” Fr. Schubert “- Ruse,” Russian Romance “,” Omega Opera Stars “and the Academic Competition” J. Verdi “- Sofia. He is a participant in many master classes of Krassimira Stoyanova, Orlin Anastasov, Veselina Katsarova and others.

He studied classical singing with Claudi Kaludov and participated in the master classes of Raina Kabaivanska, Kaludi Kaludov and others. In 2004 he became a soloist at the Sofia Opera, and later, after moving to Italy, he continued working with the famous vocal pedagogue and conductor of the Roman Opera Maestro Sergio Oliva. Throughout his career (for 25 years) he has accumulated a repertoire of more than 30 leading roles and presented them on stages throughout Europe, America / USA / and Asia / Japan and China /. In Bulgaria he performs on the stages of all opera houses and festivals, and is currently a full-time soloist at the State Opera – Plovdiv.

Lyuben Baichinski was born in 1992. She graduated from the National Music Academy in the class of Svilen Raichev and Gabriela Georgieva in the academic year 2020-2021. He is a winner of a number of international competitions, including the Balkan Romance Festival, Omega Opera Concerts, Art Stars – Varna. Participant in many master classes with prominent Bulgarian and foreign performers, including Krassimira Stoyanova, BIOA (Bologna), Boris Hristov Academy (Rome) and others.

Gergana Lyutskanova – Petrova graduated from the Academy of Music and Dance in Plovdiv in 1998. She studied conducting with Assoc. Prof. Krikor Chetinyan and Chief Assistant. Dimitar Grigorov. Later she specialized in choral conducting with Assoc. Prof. Nikola Lipov. Since 1998 To this day, she leads people at the St. Petka Church in the city of Plovdiv, with which she not only regularly participates in the church services, but also performs on the concert podium. In the period from 1998 to 2000. is a choirmaster and conductor in the Plovdiv Singing Society “Angel Bukoreshtliev”. Since 2000 Gergana Lyutskanova-Petrova has been the conductor of the Ivan Spasov Chamber Choir. In 2014 she received an award for conducting skills from SBMTD at the International Choir Festival “Black Sea Sounds” – Balchik. 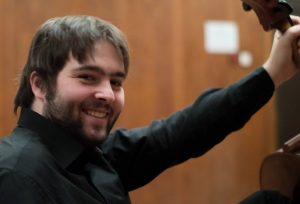