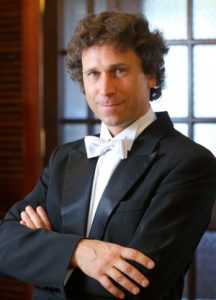 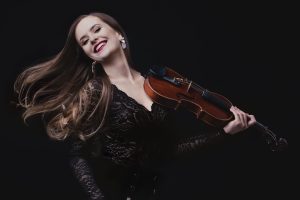 Jan Miłosz Zarzycki is Managing and Artistic Director of the Witold Lutosławski Chamber Philharmonic in Łomża. He is also a Professor at the Fryderyk Chopin University of Music in Warsaw. He is a prize winner of international competitions in Italy, Spain and Hungary.

He studied conducting with Marek Pijarowski at the Music Academy in Wrocław, gaining a diploma with distinction in 1994. He continued his studies in Vienna and Berlin, under the guidance of such famous conductors as Seiji Ozawa, Kurt Masur and Claudio Abbado. Before taking up conducting, he had graduated in violin performance from the Music Academy in Katowice (in 1990) and won several awards at violin competitions. He also finished Post-graduate Studies for Artists and Culture Animators at the Department of Management of Warsaw University.

In 1988 he became Music Director of the Jeunesses Musicales Student Chamber Orchestra at the Music Academy in Katowice, and in 1992-1993 he worked closely with the State Opera in Wrocław. He was one of the two First Prize winners at the First Witold Lutosławski National Conductors’ Competition in Białystok in 1994, receiving also three special awards (including the Award from the Orchestra). Having won Third Prize at the 7th Arturo Toscanini International Conductors’ Competition in Parma in 1997, he was invited to conduct the Arturo Toscanini Symphony Orchestra of Emilia Romagna on a tour of Italy.

He has worked with the National Polish Radio Symphony Orchestra in Katowice, Sinfonia Varsovia, the Warsaw Chamber Opera. In 1999 he was nominated the lecturer and a member of Conducting Faculty at Fryderyk Chopin University of Music in Warsaw. From this time on, he has also been conducting International Youth Music Workshop in Szczecin (as its artistic director and conductor). In 2004 he won the competition for the post of the head and artistic manager of Łomża Chamber Orchestra.

He has conducted most of Poland’s symphony orchestras. Foreign tours have taken him to Germany, France, Austria, Holland, the Czech Republic, Russia, Italy, Ukraine, Macedonia, the United States, Portugal, Mexico, Norway, Belgium, Lithuania and Belarus. So far, he has recorded 12 albums, one of which won a nomination for the Fryderyk Award of the Polish recording industry.

His honours include a Special Award from the Minister of Culture and National Heritage in recognition of the invaluable contribution to Polish musical culture (2008) and a diploma for his outstanding achievements in the preservation of Chopin’s legacy (2011 and 2013). Furthermore, in 2013 he was honoured with Gloria Artis Medal and Podlaskie Voivodeship Marshal’s Award for extraordinary achievements in the field of artistic creation, popularisation and preservation of culture. In 2014 by the decision of the Polish president, Jan Miłosz Zarzycki has become the Professor of Musical Arts.

Since 2019, Karolina Nowotczyńska have been a director of Elbląg Chamber Orchestra. She graduated at Academy of Music in Gdańsk. She was also a student of prof. Igor Petrushevski in Richard Wagner Conservatory Winna. In 2021 she got the tittle of doctor of art.

As a soloist she performed in many countries in Europe, Asia and North America, and performed with many polish philharmonies, as well as Lviv Philpharmony, or Vogtland Philharmonie Reichenbach. She won many violin competitions and got a lot of awards. The most important are: I prize and Minister of Education, Culture, Sports, Sience and Technology Award at 17th Osaka International Music Competition, 2016, II prize at International Violin Competition “Concours Bravo!” in Namur, Belgium 2013, IV prize at International Music Competition “Premio Citta’ di Padova – Virtuosite Price” in Italy 2014, and I prize at Classic Pure Vienna Competition 2018.

As an unique violin teacher, Karolina Nowotczyńska was invited to Teheran and Tabriz (Iran) to give masterclasses for two Institutes of Music.

Moreover, Karolina Nowotczyńska has big orchestral experience. Except for leading chamber orchestra, she took part in many orchestral accademies. In July 2017 she was invited to Encuentro de Musica Santander in Spain, where she lead the Sypmhony Orchestra.

She released 2 albums: One with pianist Łukasz Chrzęszczyk with Witold Lutosławski and Krzysztof Penderecki pieces for violin and piano, second album is the first in the world album with a version of Mozart Sinfonia Concertante played by violin and cello. 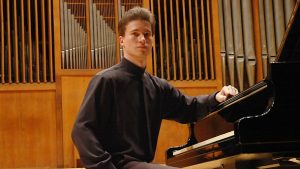 J. Brahms – Variations on a Theme of Paganini, Op.35