van Yanakov is a classical pianist and conductor. He has performed in over 30 countries in Europe, Australia, Asia and North America. As a recitalist, chamber musician, and orchestra soloist, he has appeared in venues that include the Carnegie Hall Recital Hall in New York, Cadogan Hall in London, Sydney Town Hall, Tokyo Metropolitan Theatre Concert Hall, Sapporo Concert Hall, Okinawa Convention Center, Hong Kong City Hall,[3] Shanghai Oriental Art Center, and others. He is a frequent guest of international music festivals.

Born in Sofia, Yanakov obtained Bachelor’s and master’s degrees in Piano Performance from Mannes College of Music in New York as a piano student of Arkady Aronov and Stephanie Brown. He was awarded the Artists International Debut Series Prize at Carnegie Hall. He was also a full-scholarship fellow at the Accademia Chigiana in Siena where he studied with Michele Campanella. In Bulgaria, he studied mainly with Meyer Franck and Triphon Silyanovski.

He is the artistic director and conductor of the London Chamber Players, a chamber orchestra composed of young professionals. Yanakov made his conducting debut with the Czech National Symphony Orchestra.

The artist has appeared on television and radio broadcasts in Asia, North America and Europe. Hong Kong’s RTHK TV show, “The Works”, broadcast an interview and performance with the artist, as did RTHK’s Radio 4 station. Other broadcasting highlights include Live from the Los Angeles County Museum of Art. He is often invited to give master classes at major universities, most recently at the Birmingham Conservatoire and Hong Kong Baptist University. Yanakov regularly adjudicates piano competitions throughout Asia and Europe, and is a jury member of the Ernest Bloch International Competition at the Royal College of Music in London. He is the chairman of the jury at the first Russian Piano Music International Competition in Sanremo, Italy (September 2019). Back in Bulgaria, Yanakov has been a soloist with major orchestras, including Sofia Philharmonic Orchestra, Sofia Soloists Chamber Orchestra, Classic FM Orchestra, and others.

One of Yanakov’s projects include The Four Pianists, an ensemble of two classical and two jazz pianists. They have performed four times in Bulgaria in front of 4,000-strong audiences. In 2016, Yanakov, the Four Pianists and the London Chamber Players played at London’s Cadogan Hall, alongside Theodosii Spassov.

In 2018 the artist made his Australian debut with a recital in Sydney. 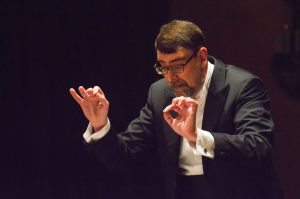 Igor Verbitsky was born in Leningrad (St. Petersburg), Russia. He graduated the famous  Leningrad Conservatoire named after N. Rimsky-Korsakov with the highest honor in choir conducting in 1989 (professor E. Kudryavtseva); then in operatic and symphonic conducting in 1995 (professor R. Martynov). He spent one year in Germany in 1991 as an excellent student under training of professors H.-D. Resch and J. Starek at the High School for Music and Theatre in Frankfurt am Main, Germany.

Since 1992 he has been the Resident Conductor of the Voronezh Symphony Orchestra, Russia. He performed various symphonic works with this orchestra from barocco music to Bartok, Stravinsky and Richard Strauss. He managed the orchestra in many prestige musical festivals: The Rachmaninov Festival in Tambov, The Tchaikovsky  Festival in Izhevsk and Votkinsk, The Platonov International Arts Festival in Voronezh and others. He successfully cooperated with internationally acclaimed soloists N. Petrov, D. Geringas, B. Berezovsky, А. Knyazev, A. Gindin, M. Kasrashvili, Z. Sotkilava, P. Laul, S. Tarassov, A. Baeva, B. Andrianov, O. Peretyatko and others.

In 1995 he successfully managed the Voronezh Symphony Orchestra during their very first Germany tour. Their performance of the Oratorio “To the unknown God” by contemporary Swiss composer A. Jenny with the Berlin Commune “Lindenkirche” church Choir in Berlin and in Dresden was received with critical acclaim. Their concerts of Russian and German classic music had also great success.

From 1996 to 2008 Maestro Igor Verbitsky was the Conductor and the Musical Adviser of the St. Petersburg Music Comedy Theatre. In addition to performing of the main repertoire he took the lead in world premiere of opera “Caliph the Stork” by Russian composer Olga Petrova.

From 1997 to 2002 he has also been teaching at the St. Petersburg Conservatoire. Some of his students were invited to be leading soloists of the Mariinsky (Kirov) Theatre. During this period there were a revival of “Betrothal in Cloister” (“Duenna”) by S. Prokofiev and ballet “Les Sylphides” by F. Chopin /A. Glazunov at the Opera Theatre of St. Petersburg Conservatoire.

From 2007 to 2010 he was the Principal Guest Conductor of the Academic Symphony Orchestra of the Saratov State Philharmonic Society.

In 2011 he got from Governor of the Region a special title “The Honored Artist of Voronezh     Region”.

In autumn 2011 together with the Voronezh Symphony Orchestra he managed a very successful tour in Austria, Czech Republic, Italy and Slovenia.

In 2012 he received the diploma of the Ministry of culture of the Russian Federation “For the big contribution to development of culture”.

In 2013 he was awarded the honorary diploma of the Union of composers of Russia for participation in the national festival “Panorama of Contemporary Russian Music in Voronezh”.

In 2015 he performed a series of concerts devoted to the 90 anniversary of the Voronezh Symphony Orchestra in Voronezh and in St. Petersburg

Denitsa Laffchieva, born 1980 in Sofia, Bulgaria, is one of the premiere young performers of the instrument today. Denitsa made her début as a soloist at the age of 14 in the Great Bulgaria Hall with the Sofia Philharmonic. Numerous national and international competitions and awards, renowned festivals and world premieres built her strong international reputation as the Bulgarian clarinet prodigy.
Denitsa toured extensively throughout Europe, Japan and Middle East, playing as a soloist with the major European orchestras. She made her international debut at the age of 15 and at the age of 18 recorded her first solo CD for Music Minus Ones- New York, with the emblematic Mozart Clarinet Concerto. She was awarded Musician of the Year 2000 by the Bulgarian National Radio and In 2003 was given the prestigious scholarship for extraordinary musicianship of the Herbert von Karajan foundation in Vienna, which was followed by another CD recording of Mozart’s Clarinet Concerto this time published by BMG-Ricordi. The CD was nominated with numerous prestigious awards and was best selling among the other CD’s from the series Soloists in Concert. For her performance of the concerto the famous conductor Gennady Rojdestvensky is saying- “…Denitsa Laffchieva is an amazing clarinettist; her performance is always to a highest level and fully deserves the highest acclaims!” In 2004, at the age of 24 only, Denitsa was the youngest musician ever given the prestigious award of the Republic of Bulgaria for Outstanding Contribution to the Bulgarian Culture.

Denitsa Laffchieva studied in some of the finest European music institutions: the Royal Academy of Music in London, the Vienna University of Music and Performing Arts and the National Academy of Music in Sofia and have obtained her Master Degree with highest honours at the early age of 20. She studied with some of the most significant living clarinettists, such as Peter Schmidl (Vienna Philharmonic Orchestra), Petko Radev (Teatro della Scala di Milano), Mark van de Wiel (Philharmonia Orchestra) and Andrew Marriner (London Symphony Orchestra).
Denitsa now lives in London. She recently worked with Sir Colin Davis, André Previn, Sir Charles Mackkeras, Kristof Eberle, Jacob Kreizberg, Valeri Gergiev at the Pacific Music Festival in Japan, Vienna Philharmonic Soloists (which concert was one of the highlights of the Pacific Music Festival) and many other conductors and orchestras and recently recorded her fifth solo CD for the prestigious Golden Found of Historical Recordings of the Bulgarian National Radio. In January 2007 Denitsamade her highly acclaimed debut recital at the prestigious Wigmore Hall in London with the famous pianist Viktoria Postnikova. Highlight in the 2008 season is her Carnegie Hall debut recital in October followed by returns in 2009 and 2010. Denitsa Laffchieva is presented by the BV Artists International.