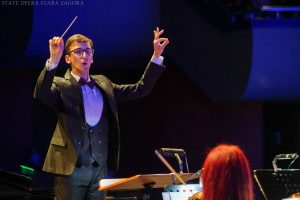 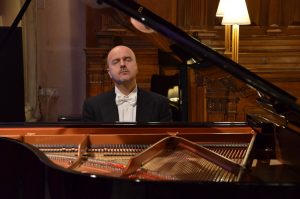 He is Guest Professor at the Xiamen Conservatory in China and in the Summer Academy Orpheus in Wien. In 2018, he received the “Grifone d’Oro Prize” from the Grosseto City.

Simon Pavlov was born in 1999 in Sliven. He started playing the piano at the age of 8 in his hometown with Elena Angelova. Graduated from NUMSI “Hristina Morfova” – Stara Zagora with a specialty in “Piano” with teachers Zlatka Doncheva and Milena Alexandrova. In 2018, he was admitted to the NMA “Prof. Pancho Vladigerov” majoring in “Opera-Symphonic Conducting” in the class of Prof. Dr. Grigor Palikarov and “Piano” in the class of Prof. Dr. Daniela Andonova, and in 2019 he started studying “Musicology” with a profile history of music with Prof. Dr. Natasha Yapova. She is currently studying piano with Prof. Dr. Margarita Ilieva.

He is the winner of the “Mlada Zagora” award for his contribution to culture and art in the city of Stara Zagora. He is a member of Club 2016 in the “Successful Children of Bulgaria” project of the “Dimitar Berbatov” Foundation and is a multiple scholarship recipient of the “Comunitas” Foundation. Participates in events of the Minyu Balkanski Foundation in Bulgaria and France. He also performs at the forums “Sofia Music Weeks”, “European Music Festival”, “Festival of Brazilian Classical Music” and others.

Many times he soloed in orchestras under the baton of Georgi Dimitrov, Krasimir Kushev and Raicho Hristov. He made his conducting debut on the stage of the Stara Zagora State Opera. He also conducts the Academic Symphony Orchestra of the NMA “Prof. Pancho Vladigerov”, Symphony Orchestra – Pazardzhik and KO “Dianopolis”.

Since 2019, he has been a pianist in the “Morfova-Prokopova” Women’s Choir with conductor Assoc. Dr. Iliya Gramatikov. In the same year, he joined the team of the “ppIANISSIMO” International Festival for the Performance of Contemporary Piano Music. Since 2020, he has been a part-time tutor at the “Prof. Pancho Vladigerov” MA. Since 2021, he has been working as a conductor in the Sliven Symphony Orchestra, and since 2022 – as an assistant conductor in the Pioneer Philharmonic. 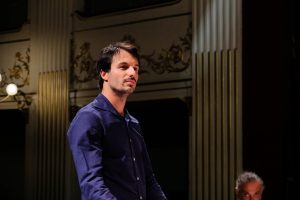 Born in Florence, Italy, Marcello De Vita is an Italo-French pianist and conductor. He completed his Bachelor with highest honors and a special mention in piano under Orazio Maione at Campobasso “L. Perosi” Conservatory, where he also studied Chamber Music with Marco Grisanti. In 2011 and 2014 he performed at the Teatro Keiros in Rome. He has participated in masterclasses at Nancy and Nizza Conservatory with Henri Barda, Fernando Rossano, Michel Beroff, at the Accademia Filarmonica Romana with Ramin Bahrami, at the Alberto Napolitano pianoforti with Antonio Pompa-Baldi, at the Associazione Leonardo in the city of Nepi with Michele Marvulli and at the Campus Musica of Sermoneta with Elissò Virsaldze. In october 2013 he performed at the Caracas festival “El piano”, as a soloist as well as with the Orquesta Sinfònica Juvenil de Carabobo for the “Sistema National de Orquestas y Coros juveniles e infantiles de Venezuela” at the Centro Nacional de Acciòn Social por la Musica. In october 2014 he was admitted to the Scuola di Musica di Fiesole, where he attended the advanced class for solo piano with Andrea Lucchesini and graduated in 2017. In 2016 he performed at the MG concerts in Bruxelles. In July 2017 he performed at the Spoleto festival “FESTIVAL DEI DUE MONDI”. In April 2018 he performed at the XX edition of the spring concerts at the Lutheran Church in Napoli. In July 2018 he was selected to perform at the Festival “Naturalmente Pianoforte” fourth edition wich took place at the Parco delle foreste casentinesi (Tuscany). He reguarly works with the Deutsches institut in Florence where in 2020 he held the conference to celebrate Ludwig van Beethoven’s 250 anniversary. He completed his Master with highest honors and a special mention in piano under Giovanna Prestia at Florence “L. Cherubini” Conservatory. He studies conducting with Simone Ori and Giancarlo Guarino. He was selected and attended the conducting Masterclass in Palermo with Ennio Nicotra, founder of the Ilya Musin Society in Italy, the “Florence Conducting Masterclass”  with M° Gyorgy G. Rath,where he had the opportunity to work with the Orchestra del Maggio Fiorentino.