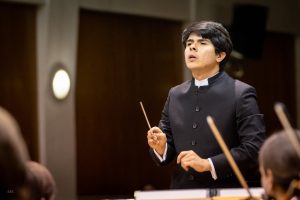 Sebastian Almanzar was born in 1994 in Medellin city, Colombia. He began his studies in Music at the age of 5 years old, singing in choirs in the city.
He was a singer with the more important choirs in Medellin, and had the opportunity to started conducting several times those choirs.
In 2012, he started his bachelor in music-conducting department, with Cecilia Espinosa and Alejandro Posada, and finished in 2017.
In 2018, Sebastian Began his bachelor in the The University of Music and Performing Arts, Viena with Professor Simeon Pironkoff (Bulgaria) .

Recently he got the second place at the European Union conducting competition, with more of 300 applicants all around the world and conducted the Pazardjik symphony orchestra. He conducted also the Vienna Symphony orchestra (2020) in the application sarching for an Assistent for maestro Andres Orozco-Estrada.