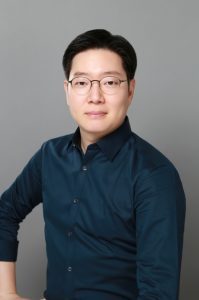 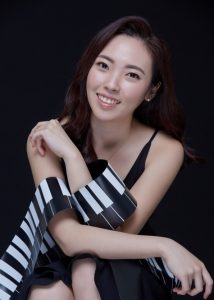 Seungwon Thomas Kim was born in 1983 in Daegu, South Korea. At the age of seven, he began his piano and violin education. From 1997 to 2001 he was a chamber musician in the Catholic Church “St. Kimdaegun “in South Korea. In the years 1999 and 2000 he won the State Youth Competition as a violinist. He also completed a major in composition from 1999 to 2001 at the GeyongBuk Music High School. In 2001 he won the Composition Competition at YoungNam University. After his state military service, he began his composition studies at KyungWon University with Prof. HyeSung Lee. Since 2010 he has been studying orchestral conducting with Prof. Uros Lajovic and Prof. Johannes Wildner at the University of Music and Performing Arts Vienna. In 2011, he participated in a performance seminar with Maestro Karolos Trikolidis in Greece, where the “City of Thessaloniki Orchestra” awarded him the First Prize. From 2014 to 2016 he was the editor of the oldest South Korean music publisher “Hyundai Music”. In the article series “Interview from Vienna”, he held monthly talks with famous Austrian musicians, educators and instrument makers and presented them in South Korea. In 2016 he took part in a masterclass with Prof. Lajovic in Dubrovnik and conducted the “Dubrovnik Symphony Orchestra”. He had his opera debut with Madame Butterfly at the “Stara Zagora Opera House” in Bulgaria in November 2016. In 2017 he participated in a masterclass with Maestro Marc Albrecht in Vienna. In June 2017, on the occasion of his conducting diploma, he was selected to conduct the ORF Radio Symphony Orchestra in the Great Hall of the Musikverein Wien.

Jayoung Yoo was born on 11.09.1989 in Republic of Korea. In 2012 she had a Bachelor’s degree from Chung-Ang University in Republic of Korea and in 2014 she had a Master’s degree from College of Music and Dance Cologne in Germany. In 2017 she completed a postgraduate course at the University of Music and Performing Arts Vienna by Prof. Roswitha Heintze.
Jayoung Yoo won first prizes at the 3rd International Piano Competition “Harmony 2015”, at the 13th International Piano Competition “Luigi Zanuccoli” and at the 4th International Chamber music competition “Don Vincenzo vitti”. She won the second prize at the Long Island College of Music Competition. In addition, she was a semi-finalist at the 17th International Music Competition Osaka in Austria.
As a pianist, she assisted Prof. Sophia Bart as accompanist for master class. In 2015 she participated at the Euromusic Festival in Halle(Salle) Germany and at the Summer Academy in Mozarteum Salzburg Austria.
She performed by Chopin etudes, Russian music under the title “Russian Blue” and toccatas by different composers in Republic of Korea. And she performed also in Zurich Swiss, Bettona Italy, Cologne, Halle, Erkrath, Wuppertal Germany.
In Vienna she performed chamber music at the Metal hall in Viennese Music Association and piano recital at Mozart House. In 2017 she performed by Friedrich Gulda under the title “… on the way to Friedrich Gulda” at Blüthner Zentrum Vienna.

Alexander Ivanov was born in 1993. in Sofia. Only 5 years of age began violin lessons with the prominent pedagogue Peter Arnaudov. In 2000 he was admitted to NMU “L. Pipkov “- Sofia in his class. Since 2006 continues his violin training with Professor Yosif Radionov at the National Academy of Music “Prof. Pancho Vladigerov “where, in 2017, Master’s Degree.  He took part in the master classes of St. Roussev, K. Mardirosyan, St. Kamilarov, V. Parashkevov, D. Brachkova, B. Vidal, A. Gavrilovichi, G. Lipkind, Alban Berg Quartet, Talich Quartet, Ysaÿe Quartet, Aviv Quartet ), Johannes Meisel (Artis Quartet) and others.  Alexander was a soloist of Sofia Philharmonic Orchestra, Symphonnette – Sofia, Academic Symphony Orchestra, Symphonie Vidin, Rousse Philharmonic Orchestra, Dianopolis Orchestra, Student Symphony Orchestra, Pioneer Philharmonic Orchestra, Junge Zürcher Harmoniker. As a soloist and chamber musician there are recitals in Bulgaria, Germany, Austria, France, Turkey, Hungary, Russia, Switzerland, Italy, Poland and others. He has numerous awards from national and international competitions and has also participated in most of the major Bulgarian music festivals. From 2017. Alexander was invited to the pride of the Goleminov String Quartet, where he played with Emil Boshev, Ognyan Konstantinov and Hristo Tanev.

Teodora Atanasova was born in Plovdiv in 1993. She started playing cello at the age of 9, and two years later she was admitted to NUMT “Dobrin Petkov” – Plovdiv, where she is part of the violoncello class of Julia Markovska. From 2012 is a student in the class of Prof. Anatoli Krastev at the National Academy of Music “Prof. Pancho Vladigerov “where, in 2016, graduated with a Bachelor’s degree. In 2017  she graduated her master’s degree in Chief Class. Prof. Atanas Krastev.

During her years Teodora has won many awards from national and international competitions and has been awarded a diploma by the Ministry of Culture for high creative achievement in two consecutive years – and in 2012.   The young violoncellist participated in the master classes of Claudio Bochorzez, Romen Gariu, Dennis Severin, Georg Bach, Konraddin Brockback, Anton Niculescu, Vladimir Perlin, Mats Lydstrom, Alvaro Huertas, Dilyana Momchilova, Kalina Krasteva and others.   In 2009, Teodora makes her concert debut as a soloist of the symphony orchestra of NUMTI “D. Petkov “. From 2011 he has performed concerts as a soloist at the Orkestrani Orchestra in the cities of Ponte di Piave and Oderzo, Italy, and also at the State Opera – Plovdiv, Academy of Music Academy “Prof. Pancho Vladigerov “- Sofia, Orpheus Chamber Orchestra, Shoumen, Rousse and Sofia Philharmonic Orchestra. With these orchestras she performs concerts from Bokerini (B dur), Haydn, Schumann, Elgar, Saint-Sals (a moll), Lalo, Dvorak, and Kol Nidrei from Bruch.Teodora is actively involved with chamber music and also plays a number of orchestral projects.