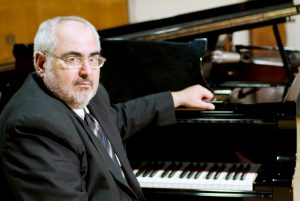 L. van Beethoven – Concerto No.4 For Piano and Orchestra in G Major, Op. 58

Born in Sofia in 1961, Rostislav Yovchev started learning to play the piano at the age of 6 with Margarita Hlebarova. Then he graduated the Secondary School of Music “L.Pipkov” in Lyudmila Stoyanova’s class. In 1984 he graduated the Bulgarian State Conservatory (today, National Music Academy “Pancho Vladigerov”) under Prof. Atanas Kurtev and after that he also completed the two-year master class.

Award-winner at a number of national and international competitions:

3rd prize at the Salerno International Contest in Italy, 1981.

Winner of the only prize at the competition for best performance of Spanish music at the course in Santiago de Compostela in 1984.

In the academic 1992-1993 year, the pianist specialized at the Royal conservatory in Brussels, in piano /piano concerto/, chamber music and accompaniment to solo singers. Rostislav Yovchev has been actively taking part in concerto activities as a soloist and chamber music performer not only in Bulgaria but also in Germany, Belgium, Spain, Poland, Romania, Croatia, Cyprus, Turkey, South Korea, Tunisia, etc. He has taken part in the most prestigious festivals at home and abroad – “Arts Hall”, ”Sofia Music Weeks”, „Varna Summer“, ”Hopes, Talents, Masters”,“Apollonia” (Bulgaria), ”Philharmonica”, “Musical October in Carthage” /Tunisia/, etc. He has given master classes in Bulgaria /Sozopol, Shumen and Pleven/, Korea /Seoul/, Romania /Iasi/, Turkey /Ankara/, Trieste /Italy/. He has numerous records for Sofia, Warsaw, Berlin, and Zaragoza Radios. He has released numerous CDs: solo performances of works of Andrey Stoyanov, performance in a chamber ensemble with the cellist Ventsislav Nikolov /for “Gega New”/, the flutist Ina Georgieva, the Korean clarinetist Yo Yangde, with the Turkish viola player Bediz Kanikli.

Rostislav Yovchev is an active journalist. He is the author of a number of materials in response to concerto life and events in Bulgaria and abroad, scientific publications, articles on the problems in the area of classical music in Bulgaria, etc. He is a piano professor at the National Music Academy “Pancho Vladigerov” – Sofia and since May 2008 – Head of Piano Department at the Faculty of Theory, Composing and Conducting. 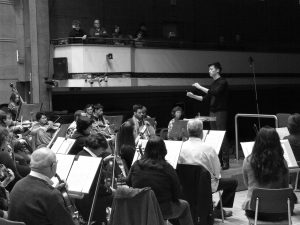 Piece, created specially for the Festival and a tribute to Mozart for his birthday on the day of the concert.

First prize winner at both the Antal Dorati International Conducting Competition in November 2018 and 1st European Union Conductor’s Competition in January 2018, Henry Cheng has established himself as an internationally acclaimed young Asian­American Conductor.

In November 2017, Henry Cheng was appointed Chief Conductor and Artistic Director of the Klangkraft Orchester in Duisburg, Germany. With a “new rich orchestral sound full of energy and vitality,” he made his Klangkraft Orchester debut at the Duisburger Akzente Festival under the festival theme of “Nie wieder Krieg”(never again war), and program title “The World Dies Screaming”, a commentary of the humanistic responsibility of climate change.

Henry has been invited to the prestigious masterclasses of Bernard Haitink and the Lucerne Festival Orchestra, Kurt Masur at the Aurora Music Festival, Tugan Sokhiev with the Deutsches Symphonie­Orchester, and Riccardo Muti at the Italian Opera Academy summer 2018.

As an educator and community outreach supporter, he has worked with and developed programs with the Metropolitan Youth Symphony Orchestra, the Bochumer Symphoniker, and the Indiana University Beethoven Project. He has also worked with many middle and high schools in his hometown of Atlanta, GA.

Henry has premiered more than forty new works of all sizes and mediums, collaborating with visual artists, choreographers, dancers, and singers. As an opera conductor and coach, he has conducted and played in productions of Candide, Die Fledermaus, Dialogues des Carmélites, La Boheme, Marriage of Figaro, Don Giovanni and Così fan tutte. .

Henry received his Bachelors in Piano at Eastman School of Music with Professor Thomas Schumacher. As a conductor, he has studied at Georgia State University, Indiana University and at the University of Arts Berlin under Maestros Michael Palmer, Arthur Fagen, David Efron, Harry Curtis and Steven Sloane.

Claudio Mansutti, graduated in clarinet with full marks from the conservatoire “J. Tomadini” in Udine under Maestro A. Pecile, and later studied with Maestros
P. Borali (RAI of Milan) and K. Leister (Berliner Philarmoniker). He has won 5 chamber music competitions of national and international level, and recorded for RAI and ORF. He has founded the Diapason Ensemble and the Accademia Ars Musicae Orchestra of Klagenfurt, where he was first clarinet, and reached the national finals for the European Youth Orchestra. He performed as a soloist with: Accademia Ars Musicae Orchestra, Zagreb Radio and Television Orchestra, Orchestra UECO in Sala Verdi (Milan), Diapason Chamber Orchestra, Virtuosi di Praga, Salzburger Solisten, Vienna Mahler Orchestra, Dolomiti Sinfonia, Budapest Chamber Orchestra, Moravian Philharmonic Orchestra, Zlin Philharmonic Orchestra, Hradec Kralove Philharmonic Orchestra, Radom Chamber Orchestra, FVG Mitteleuropea Orchestra, Orchestra Regionale Siciliana. Mansutti is an experienced music events organiser and artistic director. Since
1991, he is the artistic director of the Teatro Luigi Bon in Udine and of the Festival “Carniarmonie”. He collaborates on a regular basis with the Berliner Philarmoniker String Quintet, with the Janacek Quartet he has founded Ensemble Variabile (a chamber group with whom he performs regularly throughout Europe). In 2001 he received the “Moret d’aur” prize for Culture Personality of the Year in Friuli Venezia-Giulia.