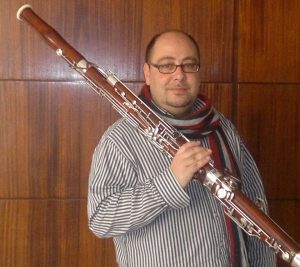 Mozart – Concerto for Bassoon and Orchestra

Borodin – “At the steppes of Middle Asia”, symphonic picture

Rossini – “The Barber of Seville” overture

Methods Tsvetanov ends symphonic conducting at the Academy “Pancho Vladigerav” in 2010 in the class of prof. Plamen Djurov.

He has participated and prizes in various national and international piano competitions, participate in master classes in conducting.

He currently works as an assistant conductor of the symphonic-operetta company “Maestro Georgi Atanasov.”

„Do not sing to me, beautiful one!“, orchestration by Hr. Pavlov (Executive M. Berova)

Intermezzo from the opera “Cavalleria Rusticana”

Aria of Delilah from the second act of the opera “Samson and Delilah” (Executive. M. Berova)

Aria of Snow around the eponymous opera (performed. E. Neshevska)

Prelude to the first act of the opera “La Traviata”

Habanera from the first act of the opera “Carmen” (Executive. M. Berova)

Segidilya of the first act of the opera “Carmen” (Executive. M. Berova)

Bolero of Elena in the fifth act of the opera “Sicilian evening” (Executive. E. Neshevska)

Elitsa Neshevska graduates classical singing in the same class as prof. Mila Dyulgerova in NMA “Prof. Pancho Vladigerov” in year 2000. She continues her education with prof. Mati Pinkas and has a completed master singing class with her within the “Sofia music weeks”. She also improves her singing skills in the first class in interpretation of French music led by Vera Nikolova and Olivie Doria, master class led by Roberto Scanduizzi in Trevizo, Italy and an international master class led by Luciana D’Intino and Roberto Scanduizzi on the opera “Don Carlos” by Giuseppe Verdi.

Elitsa Neshevska is a performer in numerous concerts with opera and chamber music. Together with composer and conductor Bistra Dilyanof, she represents Bulgaria in the European “AB Art Projects” with a cycle of concerts with orchestra and the participation of Bulgarian and foreign soloists in the Central Military Club – Sofia. She has participated in Austrian music weeks, in the festival of modern Russian music, she presents works by Bulgarian composers of New Bulgarian music, she has concerts as a soloist with the Symphony Orchestra and the mixed choir of BNR operas in Burgas and Stara Zagora, symphony orchestras in Vidin, Vratsa and others.

In her repertoire she has roles from operas by Mozart, Verdi, Puccini, Bizet, Tchaikovsky and others. She also has records about the fond of the Bulgarian National Radio and foreign companies. Elitsa Neshevska is the first performer of works by Alexander Tekeliev, Blagovesta Konstantinova, Alexander Mikhailov, Vera Baeva, Bistra Dilyanof. She annually gives recitals with works of Russian and Bulgarian composers.

In 2003 Elitsa Neshevska began her teaching at the “Professor. Pancho Vladigerov ” national music academy. She is currently an associate professor of classical singing with a separate class.

Michaela Berova was awarded the special prize and the title of laureate of the international contest “Art Stars” – Varna 2016. Winner of the Grand Prix of “romance-lovely sound” (RCIC Sofia) and the festival “Balkan romansiada” (House of Moscow in Sofia) .  She also participates in various national and international festivals. She has performed in Germany, France and Cyprus.

A versatile performer whose repertoire includes not only traditional repertoire, but also contemporary music, including premieres of vocal music from different composers. Combines chamber singing music by Pergolesi, Handel, Bach, Mozart, Schumann, Schubert, Wagner, Mahler, Rachmaninoff and contemporary composers of opera and operetta roles of Mozart, Puccini, Verdi, Donizetti, Johann Strauss, Offenbach, Kalman, and some famous musicals like “The Wizard of Oz” “West Side story”, “Cats” and others. She has given concerts as a soloist with various orchestras in Bulgaria, Sweden, Finland and China.

Tanya Radeva-Lazarova has won numerous awards from national and international competitions. In 2014, she won the Crystal Lyre as a participant in the team of the internationally acclaimed staging of Mussorgsky’s opera “Boris Godunov” – a product of the Sofia National Opera. She studied opera singing with world famous singers such as Lyudmila Hadzhieva and Darina Takova. She has participated in many master classes: Stefka Evstatieva, Darina Takova, Torre Dingstad, Alexei Rudnevski, David Lutz and others. She has also made recordings for the Bulgarian national radio and television, for various radio and TV stations and record companies from Bulgaria, Italy and the