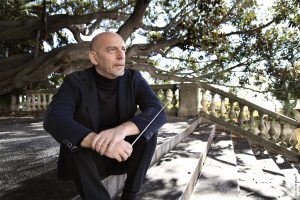 He studied at the School of Music of Brescia and graduated in Organ and Organ Composition with high marks under M° F. Castelli. At the same time he got the Diploma of “Maturitа Classica” and then went to

university, attending the courses of the D.A.M.S. Music section at the faculty of “Lettere e Filosofia” in Bologna. Besides, he studied composition and orchestra conductorship with M° G. Cataldo, widening his knowledge and experience.

Founder and Conductor of the “Orchestra Vox Aurae” of Brescia since 1992, he dedicates himself to the rediscovery and deepening of little known authors of the baroque music such as F. Durante, F. L. Gassmann, J. Myslyvecek. With the “Vox Aurae” he did record the complete series of Symphonies for Strings by F. Durante, the first volume of the 20th century Italian authors who wrote in Baroque style, the Symphonies for Strings by J. Myslivecek, the integral of the Symphonies for strings of FL Gassman, and a CD dedicated to the piano and orchestra concerts of W.A. Mozart. All recordings have been edited by Agorа recording company in Milan.

In 2003 he becomes the Artistic Director and 1st Conductor of the “Orchestra del Teatro Olimpico” of Vicenza, a position he held until December 2011. In October 2005 he conducted the Orchestra of the

Teatro Olimpico of Vicenza at the Barge Music of New York where he returned in March 2006 to conduct in the prestigious Carnegie Hall.

Born on 27.11.1994. in the town of Shumen. He plays a violin for six years. Since 2008 until 2013. he studied at NIH “Dobri Hristov” in Varna. Currently she is a student at “National Music Academy” Prof. Pancho Vladigerov “, Sofia, specialty” Violin “in the class of Prof. Ginka Gichkova.

There are awards from contests such as:

– Third prize from the 13th National Contest for Performances by Czech and Slovak Composers Varna – 23.03.2011 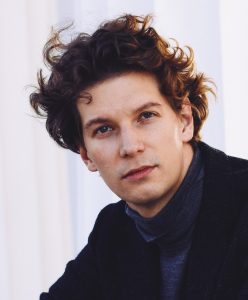 David Holzinger is the founder and artistic director of the EXEDRA Ensemble with which he debuted at the opening ceremony of the Salzburg Festival 2017.

It is his fourth season as the assistant conductor of Gustav Kuhn, the artistic director of the Tiroler Festspiele Erl/Austria.

David Holzinger conducted several concerts on a successful tour to China. He was invited several times to participate in masterclasses at the RNCM Manchester with Sir Mark Elder and Clark Rundell where he worked together with the musicians of the Manchester Camerata. Further masterclasses led him to Nicolás Pasquet, Mark Stringer, Johannes Schlaefli, Christian Kluttig and Peter Guelke. His artistic work connects him with orchestras like the Moravian Philharmonic Orchestra Olomouc, the Rousse Philharmonic Orchestra, the Filarmonia de Stat Sibiu as well as the Vilnius State Symphony Orchestra and the Salzburg Chamber Soloists.

David Holzinger studied orchestra conducting at the music university “Carl Maria von Weber” in Dresden/Germany with Christian Kluttig and Steffen Leissner. After accomplishing his studies as a violinist he began his conducting studies with Maximilian Cencic at the conservatory in Vienna.

As guest conductor he performed at the Berio-Hall of the Konzerthaus in Vienna with the Konzertvereinigung Wien orchestra as well as the ASO orchestra Vienna. He was principal conductor of the TU-orchestra Dresden and the Kammerorchester Dippoldiswalde in Germany.