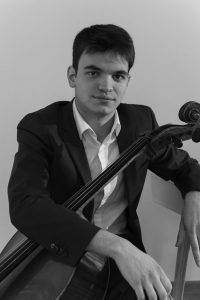 Momchil Pandev was born in 1999 in Sofia. He started playing the cello at the age of six with Mrs. Ani Atanasova. The nine-year-old won his first prize in an international competition. Eleven awards and an honorary diploma from various international competitions for solo performance and chamber music in Bulgaria, Great Britain, the Czech Republic and Latvia follow. He has played as a soloist with the orchestra of the Bulgarian National Radio, with the orchestra / ASO / of the National Music Academy “Prof. Pancho Vladigerov ”and the Vidin Symphony. He has attended cello master classes by Prof. Wen Sin Young, Prof. David Geringas, Prof. Stefan Popov, Prof. Romain Gariu, Prof. Anton Nicolescu, Prof. Gabriel Lipkind, Prof. Vladimir Perlin, Prof. Radvam Suma and Dilyana Momchilova. He has twice participated as a fellow in the Mundi Music Festival (chamber music, Belgium) with professors Prof. Vladimir Perlin, Itamar Golan, Matthew Hunter and Rick Stoytin and has given concerts with several chamber ensembles.

In 2018 he graduated from the National Music School “Lyubomir Pipkov” in the cello class of Mrs. Daniela Cherpokova. He is currently a cello student in the class of Ch. Assistant Professor Dr. Atanas Krastev at the National Academy of Music “Prof. Pancho Vladigerov