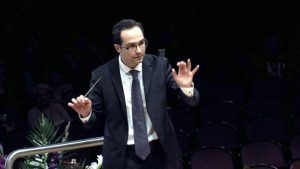 W. A. Mozart – Overture to The Magic Flute

Since 2010 Denev has been a principal conductor of Pioneer Youth Philharmonic in Sofia. Since 2012 he has been a regular conductor of Sofia Session Orchestra, part of Four For Music LTD where Denev conducts a lot of soundtrack scores as well as contemporary music for USA, UK, France, India etc. Lyubomir has been a guest conductor in many orchestras in Bulgaria among them are the Sofia Philharmonic Orchestra, New Symphony Orchestra, Simfonietta Sofia, Vratsa Philharmonic, Vidin etc. As a guest conductor in the Ruse State Opera Lyubomir Denev conducted “La Traviata” by Verdi and “The Elixir of Love” by Donizetti. In 2012 Denev was appointed pianist at The National Opera and Ballet in Sofia where he was an assistant to Richard Trimborn for  the Wagner’s “Twilight of the Gods”.

Denev had successful tours with Bulgarian orchestras in China, Hungary, Serbia, Turkey, Greece, Bulgaria. Lyubomir is a conductor and one of the founders of Balkan Youth Symphony Orchestra in collaboration with Ministry of Education of Bulgaria, Foundation “Prof. Vladi Simeonov” and couple of Music Schools on the Balkan Peninsula.

Denev’s works and orchestrations have been performed in the USA (Miami University of Music), Germany (tours across the country 2008 – 2013), Bulgaria. Denev has the opportunity to conduct most of his own orchestral works, among them Concerto for Percussions and Symphony Orchestra, the soundtrack to “The Sign of the Bulgarian”, Oratorio for Shango, “The Embroidery” (Dance show) etc.