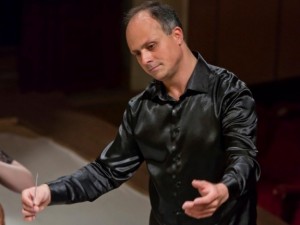 J. Verdi – Overture in the opera “King for a Day”

“Vesko Eschkenazy is a brilliant violinist” – remarked the De Telegraaf in November 2000, one of the largest dailies in the Kingdom of Netherlands, after his interpretation of the Violin Concerto No. 1 by Szymanowski with the Royal Concertgebouw Orchestra in Amsterdam. Eschkenazy has been its concertmaster since the beginning of the 1999/2000 season.

Born into a Bulgarian Jewish family in 1970, Vesko Panteleev Eschkenazy became a child prodigy in the field of music when he appeared as an orchestra leader. At 11 years old, he went on to become the concertmaster of the youth Philharmonic Orchestra of Prof. Vladi Simeonov. He is a graduate of the L. Pipkov National Music School in Sofia and of the P. Vladiguerov State Music Academy where he studied violin with Angelina Atanassova and Prof. Petar Hristoskov.

In 1990, Vesko Eschkenazy left Bulgaria for London and completed a two-year master’s degree for solo performers with Prof. Ifrah Neaman at the Guildhall School of Music, and received a Solo Recital Diploma – 1992. He is a laureate of the International Violin Competitions “Wieniawski”, Beijing and Carl Flesch in London. He performs extensively in Europe, USA, South America, India, China and takes part in the festivals Midem in Cannes, Montpellier and Atlantic – France, the Music Festivals in Nantes and Rheims, the New Year Music Festival in Sofia, Varna Summer and Apolonia.

Since the summer of 2000 Vesko Eschkenazy has been playing a Guarneri del Gesu violin from 1738, the property of an anonymous sponsor in The Netherlands.

Ya Sibelius – Concerto for violin and orchestra, op 47

In 1999 Emanuel graduated from Artave (a specialist music school) as the best student of the year. During this time he studied with Costa Santos, Sergei Aroutiounian and Yakow Marr. He then moved to London, where he got a Bachelor of Music Degree from the Guildhall School of Music and Drama (studying with Professor John Glickman) and a Master’s Degree in Advanced Performance at the Royal College of Music, where he studied with Dr. Felix Andrievsky. Other professors with whom Emanuel studied include Ulf Hoelscher, Alberto Lysy, Vadim Brodsky, David Takeno, Gerardo Ribeiro and Ilya Grubert.

The Violin Concerto by Joaquim dos Santos, was written for, and premiered by Emanuel in Italy and Portugal. The recording of the premiere was released in 2005. Karl Fiorini´s Violin Concerto, also written for Emanuel, was premiered in Rotterdam, Portugal, Malta and recorded for Divine Art label for wide critical acclaim.

Emanuel is an active chamber musician and has studied in masterclasses with Bernard Greenhouse (Beaux Arts), Florestan and Peabody trios and the Borodin, Takacs and Vellinger Quartets. He was a founder member of the Vianna da Motta Piano Trio, with whom he performed extensively in the U.K. and Portugal and recorded a CD for Centro Atlântico label. In 2003, he formed a violin and harp Duo with Ieuan Jones, playing regularly in the U.K. He is the artistic director and first violinist of Guimarães String Quartet.

After a 10-year tenure as concertmaster of Orquestra do Norte in Portugal (2005-2015), Emanuel was appointed concertmaster at Baltic Neopolis Chamber Orchestra in Poland. As a guest concertmaster Emanuel played with Spanish National Orchestra, Czestochowa Philharmonic and Seoul Classical Players (South Korea).

He plays on a tonal copy of a Guarnerius del Gesu, by Martin Schleske (Munich, 2004), which he acquired with the help of a Loan Fund for Musical Instruments’ grant. Emanuel is a D’Addario artist.