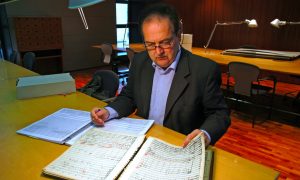 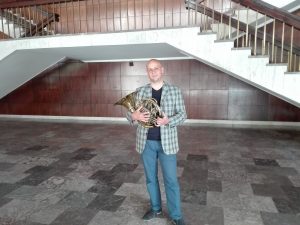 He studied flute, piano, choral and orchestral conducting at the Municipal Conservatory of Barcelona (Conservatori Superior de Música de Barcelona) with prestigious teachers such as Enric Ribó, Manuel Oltra, A. Ros-Marbà and Miquel Farré, among others.

He has performed in different cities of Catalunya and of Spain, as well as in Paris and Nirot (France), Brussels (Belgium), Berlin (Germany), Lausanne (Switzerland), Vladimir and Chernogolovka (Russia), Grosseto (Italy), Monterrey (Mexico) and Vancouver (WA – USA).

As an orchestra conductor, his musical repertoire is very extensive. He has conducted works such as Pictures at an Exhibition by Mússorgski-Ravel, Petroushka by I. Stravinsky, Symphony No. 9 by L. van Beethoven, the oratorio El Pessebre by P. Casals, Swan Lake by P. I. Tchaikovsky, Carmen by G. Bizet, El giravolt de maig by E. Toldrà. He has also conducted many premieres by present-day Catalan composers.

As well as being the guest conductor of different orchestras, he is currently the principal conductor of the Symphonic Orchestra of Sant Cugat (Barcelona).

Born on 16.06.1976 in Pazardzhik. He graduated the “Dobrin Petkov” Secondary School in Plovdiv in the class of Snezhana Georgieva. In 1999, Graduated from Waldhorn with Professor Vladislav Grigorov at “P.Vladigerov” State University – Sofia. In 1996 Varna Summer participated in the master class in Waldhorn of Prof. Hermann Bauman-Germany and in 2000. Graduated from the Summer Academy with Prof. Radovan Vladkovich at the Motcerteum in Salzburg.

In 2011, As a part of a quartet is a soloist in the town of Pazardzhik and Sliven in April 2016. Is a soloist of Symphonie – Vidin. Since May 1997. He is the first to be a Wallenhorn at the Symphony Orchestra of Pazardzhik under the command of maestro Grigor Palikarov. From March 2013 Also works in the State Opera – Stara Zagora. 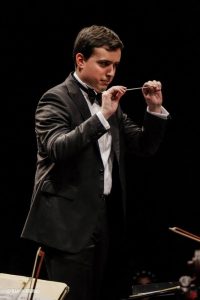 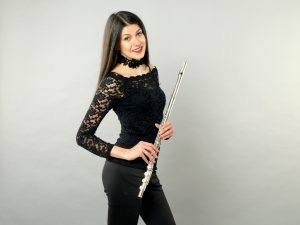 In 2006 won the fifth edition of the International award “Giuseppe Sciacca” with the track for piano “Mozarteum”. The prestigious prize washanded to him at the Italian Chamber of Deputies.
His performances have been broadcast by TVP (Poland), from RadioMaria from SAT2000, by Rai Uno and by RaiTre. He recorded for Amadeus, the most important classical musica magazine in Italy.
Its global interest towards the art of sound led him to become interested in folk music and to be the accordion of the folk group “Città di Fondi”, which, in 2011, he won the “Best Music Award” at the “8th International Nicosia Folk Dance Festival” (Cyprus).

Petra Atanasova was born in Rouse. She graduated from the National Art School “Prof. Veselin Stoyanov “in her native town with flute specialty. She is currently studying as a master in the National Academy of  Music “Prof. Pancho Vladigerov” – Sofia under Prof. G. Spasov.

She has participated in the master classes of Prof. Georgi Spasov, Prof. Andreas Adorian (Switzerland), Robert Wynn (Germany), Dieter Fluri (Austria), Caroline Dobermund (France), Patrick Gallois (France), Philippe Bernolde Schwab – Piccolo (Germany) and others. In 2012. Receives a diploma for high creative achievements from the Ministry of Culture of the Republic of  Bulgaria.She has performed as a soloist at the Rouse Philharmonic Orchestra, at the Academy of Music and Performing Arts in 2014 and 2017, and at the Sofia Philharmonic in 2016 and 2017. She has also performed solo concerts on several occasions. She has participated in the Pioneer Youth Philharmonic – Sofia, with which she has participated in concerts in Sofia, Varna Summer Festival and others. It is often an additions to the compositions of our various orchestras – the Sofia Philharmonic Orchestra, the Symphony Orchestra, the Symphony Orchestra – Sofia, the Sofia Opera and the Ballet. Since September 2016 he has been a orchestra of a State State Opera – Rousse.