Elena Ganova began her musical journey at the age of 6, when she first touched a musical instrument – a violin. With the instructions of her teacher Alexi Draganov, she graduated from the National School of Arts in her home city of Rousse. During his school years he became the winner of the competitions in Shumen – “Pancho Vladigerov”, Bourgas – International Competition for German and Austrian Music, Ruse – International Competition “Franz Schubert” (chamber music).
Later on when he was accepted at the AMU “Prof. Pancho Vladigerov “in the class of Prof. Yosif Radionov, won awards from the competitions Provadia -” Svetoslav Obretenov “, Gotse Delchev -” The Children of Paganini “(violin and chamber music), as well as the violin academy in 2016. Laureate is The international violin contest in Haskovo “Nedyalka Simeonova” twice – as student and student.

She was a soloist of the symphony orchestras in Rousse, Razgrad, Pazardjik, the Sofia Philharmonic Orchestra and the orchestra at the Academy. He graduated from a number of seminars and master classes with famous musicians from all over the world, violin, chamber music, baroque violin and viol.

In 2017, at the invitation of the Bulgarian embassy in France, Elena Ganova, together with two colleagues from AMA, performed a festive concert on the occasion of the day of Bulgarian education and culture in the embassy building in Paris. 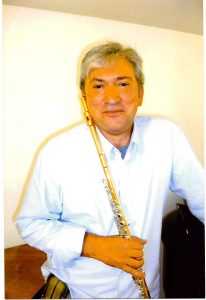 Eugeniy Chevkenov was born in a family with hundreds of years of music-tradition, which has it´s roots in 19th century. His father Vladimir Chevkenov was pianist, his mother Elena Baldjieva a famous opera singer and vocal professor. His musical inheritance goes back to his great-grandfather, Edgar Bluemel, a composer and conductor, who graduated with honors at the Vienna Music Academy, a contemporary of the late Johann Strauss, Johannes Brahms and Anton Bruckner.

Born 1971 in Plovdiv, he started to study violin at the age of 6, at 13 he gave his first solo-recital and played as a soloist with an orchestra.

At age 17 he won 1st prizes at both National Violin Competition and National Chamber Music Competition.

After studies in Sofia he continued his education in Vienna, where still a student he played several years in Vienna Philharmonic and Vienna Staatsoper.

Trifon Trifonov was born in the town of Pazardzhik in 1965.

He graduated from the Secondary music school in Plovdiv and later from the Academy of  music, dance and fine arts – Plovdiv.

Since 1992 he has been a soloist at the “Maestro Georgi Atanasov” Symphony Orchestra, Pazardzhik.

From 2000 to 2002, he was a student at Ecole normale de musigue “Alfred Corlot” Paris with Professor Patricia Nagl.

He has made tours in Europe and Asia.